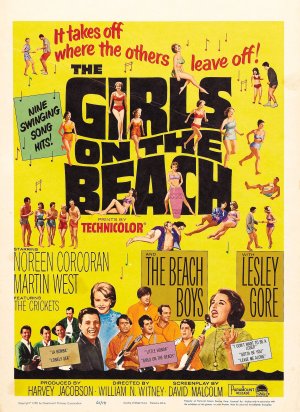 Dumb, mostly dull comedy about Alpha Beta sorority sisters trying to raise $10,000 to make the final balloon payment on the sorority house mortgage. Their house mother, Mrs. Winters (Sheila Bromley) spent the treasury on charitable causes like clothing for the poor and operations for the sick. The three main girls, Selma, Cynthia and Georgia (Noreen Corcoran, Linda Marshall and Gail Gilmore) (who are nearly indistinguishable from one another… they all have the same blonde hairstyle and similar faces) enter the other girls into various local contests with cash prizes; a beauty contest, a cake baking contest, you know… girl stuff.

Meanwhile the lovely girls are being pursued by three surfers (Martin West, Steve Rogers and Aron Kincaid – in his first beach movie) who try to impress the girls by claiming to be good friends with The Beatles. Duke (West) pretends to be Ringo Starr over the phone and promises the girls he’ll come do a benefit concert for them.

The guys feel bad almost immediately about the hoax but don’t get around to confessing to the girls until the night of the concert. The angry girls put on mop-top wigs and try to pass themselves off as The Beatles. It doesn’t work, but the angry mob that paid $5 to see fab four doesn’t mind too much. Even though only about forty people show up to the benefit, enough money is raised to save the sorority house, the boys are forgiven and the movie has a happy ending…

You probably shouldn’t think too deeply about “The Girls on the Beach”, or any of these beach movies really. But there is one gigantic hole in the plot that isn’t resolved. After “Ringo” agrees to play the benefit concert, the girls begin advertising that The Beatles are coming to town. A telegram arrives for Selma from the real Beatles management telling her she is being sued for false advertising. The guys find out about the telegram, sneak into the Alpha Beta house and steal it before Selma even lays eyes on it. After the boys, who have have to dress in drag to escape the sorority house, are home free, the telegram is never mentioned again. Problem solved? No, just because Selma never sees the telegram doesn’t mean she’s no longer being sued. Happy ending indeed.

Also along for the ride are: